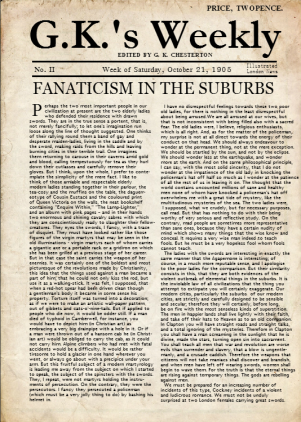 Perhaps the two most important people in our civilization at present are the two elderly ladies who defended their residence with drawn swords. They are in the true sense a portent, that is, not merely fancifully; to let one’s imagination run loose along the line of thought suggested. One thinks of their rallying round them a band of gay and desperate maiden-ladies, living in the saddle and by the sword, making raids from the hills and leaving burning cities in their terrible trail. One imagines them returning to carouse in their caverns amid gold and blood, calling tempestuously for tea as they hurl down their cutlasses and carefully remove their gloves. But I think, upon the whole, I prefer to contemplate the simplicity of the mere fact. I like to think of those amiable and respectable elderly modern ladies standing together in their parlour, the tea-cosy and the muffins on the table, the daguerreotype of Cousin Eustace and the couloured print of Queen Victoria on the walls, the neat bookshelf containing “Enquire Within,” “The Lamp-Lighter,” and an album with pink pages – and in their hands two enormous and shining cavalry sabres with which they are consientiously ready to slaughter their fellow-creatures. They eyes the swords, I fancy, with a trace of disquiet. They must have looked rather like those figures of the virgin martyrs that may be seen in the old illuminations – virgin martyrs each of whom carries a gigantic axe or a portable rack or a gridiron on which she has been grilled at a previous stage of her career. But in that case the saint carries the weapon of her enemies. It was certainly one of the boldest and most picturesque of the revolutions made by Christianity, this idea that the things used against a man became a part of him; that he could not only kiss the rod, but use it as a walking-stick. It was felt, I supposed, that when a red-hot spear had been driven clean though a gentleman’s body it became in some sense his property. Torture itself was turned into a decoration; as if we were to make an artistic wall-paper pattern out of gibbets and cats-o’-nine-tails. But if applied to people who die now, it would be odder still. If a man died of typhoid in Camberwell, for instance, you would have to depict him (in Christian art) as embracing a very big drainpipe with a hole in it. Or if a man were thrown out of a hansom cab he (in Christian art) would be obliged to carry the cab, as it could not carry him. Alpine climbers who had met with fatal accidents would be a difficulty. It would be rather tiresome to hold a glacier in one hand wherever you went, or always go about with a precipice under your arm. But this fruitful subject of a modern martyrology is leading me away from the subject on which I started to speak, the subject of the spinsters with the swords. They, I repeat, were not martyrs holding the instruments of persecution. On the contrary, they were the persecutors. I fancy they persecuted a policeman (which must be a very jolly thing to do) by bashing his helmet in.

I have no disrespectful feelings towards these two poor old ladies, for there is nothing in the least disrespectful about being amused.We are all amused at our wives, but that is not inconsistent with being filled also with a sacred fear. The old ladies were, I believe, religious enthusiasts, which is all right. And, as for the matter of the policeman, my surprise is not at all direct towards the energy of their conduct on that head. We should always endeavour to wonder at the permanent thing, not at the mere exception. We should be startled by the sun, and not by the eclipse. We should wonder less at the earthquake, and wonder more at the earth. And on the same philosophical principle, I can say, with the most solid sincerity, that I do not wonder at the impatience of the old lady in knocking the policeman’s hat off half so much as I wonder at the patience of all the rest of us in leaving it on. The thought that the world contains uncounted millions of sane and healthy men none of whom have knocked a policeman’s hat off overwhelms me with a great tide of mystery, like the multitudinous mysteries of the sea. The two ladies were, I supposed, what we crudely, but for necessary purposes, call mad. But that has nothing to do with their being worthy of very serious and reflective study. On the contrary, mad people are sometimes more representative than sane ones, because they have a certain nudity of mind which shows many things that the wise know and conceal. It requires a very wise man indeed to teach fools. But he must be a very hopeless fool whom fools cannot teach.

The ladies with the swords are interesting in exactly the same manner that the Agapemone is interesting; of course, in a much more reputable sense, and I apologise to the poor ladies for the comparison. But their similarity consists in this, that they are both evidences of the violent outbreak of elemental things in the suburbs. It is the inviolable law of all civilizations that the thing you attempt to extirpate you will certainly exaggerate. Our modern cities, particularly the suburbs  of our modern cities, are strictly and carefully designed to be sensible and secular; therefore they will certainly, before long, be on fire with the most senseless kinds of superstition. The men in happier lands shall live lightly with their faith, and take off their hats to Heaven as to an old companion. In Clapton you will have straight roads and straight talks, and a total ignoring of the mysteries. Therefore in Clapton you shall have a man screaming in the sunlight that he is divine, made the stars, turning open sin into sacrament. You shall teach all men that war and revolution are worse evils than surrender and slavery, that a blow is ungentlemanly, and a crusade caddish. Therefore the weapons that citizens will not take maniacs shall discover and brandish, and when men have left off wearing swords, women shall begin to wave them. For the truth is that the eternal things are rising against temporary things. The gods are rebelling against men.

We must be prepared for an increasing number of incidents of this type, Cockney incidents of a violent and ludicrous romance. We must not be unduly surprised at two London females carrying great swords. Before we have done with the matter we shall see bankers carrying battle-axes, curates hurling javelins, governesses girt with great knives, and charwomen settling affairs of honour with rapiers. The arguments by which the scientific persons attempt to prove that men must become more mechanical or more peaceful always ignore one not unimportant factor – the men themselves. Civilisation itself is only one of the things that men choose to have. Convince them of its uselessness and they would fling away civilisation as they fling away a cigar. The sociologists always say what will happen in the material world, and never seem to ask themselves what would happen meanwhile in the moral world. A perfect allegory of this may be found in a passage of Mr. Barry Pain’s delightful book, “De Omnibus.” The scientific working-man endeavouring to explain to the others the laws of gravity, or some such triviality, asks the omnibus-conductor what would happen if he, the speaker, dropped a penny into his, the conductor’s beer. I quote from memory: ” ‘It ‘ud drop to the bottom wouldn’t it?’ says the scientist. ‘Yuss,’ I says, ‘that’s one of the things that ‘ud ‘appen. Another thing ‘ud be that I should punch your fat ‘ed off at the root for takin’ a lib with my liquor.’ ” That is the sacred and immortal voice of mankind replying to the insolence of the specialist. The sociologist tells us that all sorts of things under certain conditions must happen, that the obliteration of nationality must happen, that the command of everything by science and scientific men must happen; and all because some particular economic or material fact must happen. “Yuss,” we says. “That’s one of the things that’ll happen. Another thing’ll be that we shall punch their fat ‘eds off at the root for takin’ a lib with the moral traditions of humanity.” Their evolution will go on exactly until our revolution chooses to begin.

If we cannot provide the great cities and the great suburbs with some kind of poetry, they will simply go on breeding these broken fanaticisms that make women wave sabres and men found insane religions. If we will not have religion, we are reduced to the even more annoying necessity of having religions. If we will not have romance in dress, in carriage, in mode of thought, the romantic element in mankind will materialise itself in the form of a great clout on the head with a cavalry sabre next time we go to call on a maiden lady of independent means. For it cannot be too often insisted upon  that the way to avoid sentiment becoming too sentimental is to admit the existence of sentiment as a plain, unsentimental fact, a thing as solid and necessary as soap. Some unhappy Stoics in the modern world are perpetually concealing their emotions for fear of what they call “scenes.” And the consequence is that they are always having scenes from morning till night. The sensible Stoical Enlgish son goes red to the roots of his hair, and curses and gasps and exclaims against the sensible and Stoical English father. And all because they will not simply and sanely confess their emotions. All because they will neither of them merely say, “My dear father (or son) I am horribly fond of you, and at this moment it would give me enormous pleasure to throw a chair at your head.” Their reluctance to admit their emotions becomes the most violent of all their emotions. Their shame of sentiment makes them ore sentimental than any man need naturally be. Romantic and openly emotional people never make scenes. They never make scenes, because to them emotion is an easy and natural thing, a thing as evident and human as a man’s nose, a thing to be carried as lightly as a man’s walking-stick. No, we must do what has been done in the South of Europe. Make your civilisation reasonably romantic, and anyone who is unreasonably romantic will be hooted down the street.