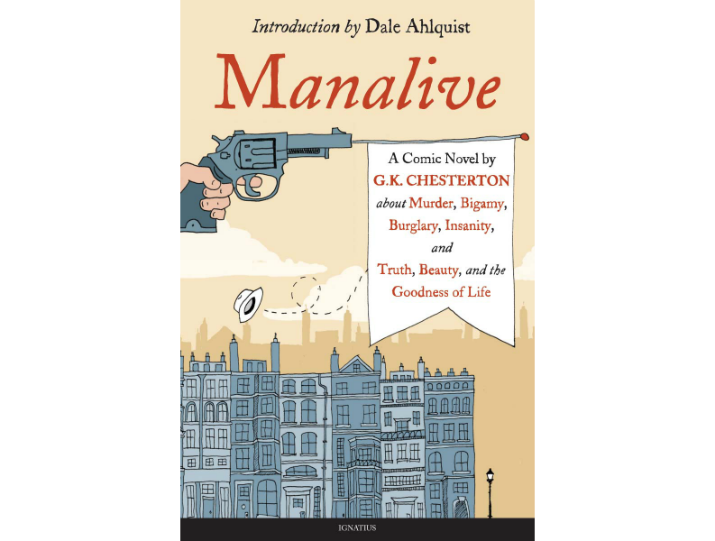 There is one thing that the reader may count on when picking up one of Chesterton’s novels, and that is simply that there is no way of knowing what to expect. There is always an air of mystery, of danger, of humor, of depth, and without fail a little absurdity brought about in attempt to awaken the reader to life.

Manalive is the story of Innocent Smith, a colossal and comic man who bounds onto the grounds of Brighton House – a manor filled with those who have forgotten the immediacy of existence – and proceeds to awaken life into its residents. Yet when the spirited and mirthful Smith is accused of murder, burglary and unfaithfulness to his wife, it is up the residents of Brighton House to form a court and defend his innocence against the masters of modern science and psychology.

As with most of Chesterton’s novels, Manalive follows a certain definite pattern, a pattern which in this case serves to prove the point which is the philosophy of Innocent Smith: “I am going to hold a pistol to the head of the Modern Man. But I shall not use it to kill him–only to bring him to life.”

Manalive is a wonderfully entertaining and comic tale the goal of which is to bring people to life, to make them recognize the world around them, and at the same time to see the boyish wonder which serves as the foundation for this mirth at life.

The idea behind the text is best described by Chesterton himself in his Autobiography:

“… I invented a rudimentary and makeshift mystical theory of my own. It was substantially this; that even mere existence, reduced to its most primary limits, was extraordinary enough to be exciting. Anything was magnificent as compared with nothing… At the backs of our brains, so to speak, there was a forgotten blaze or burst of astonishment at our own existence. The object of the artistic and spiritual life was to dig for this submerged sunrise of wonder; so that a man sitting in a chair might suddenly understand that he was actually alive, and be happy…

Thus, among the juvenile verses I began to write about this time was one called ‘The Babe Unborn’, which imagined the uncreated creature crying out for existence and promising every virtue if he might only have the experience of life. Another conceived the scoffer as begging God to give him eyes and lips and a tongue that he might mock the giver of them; a more angry version of the same fancy. And I think it was about this time that I thought of the notion afterwards introduced into a tale called ‘Manalive’; of a benevolent being who went about with a pistol, which he would suddenly point at a pessimist, when that philosopher said that life was not worth living.”

Manalive is at once clever and poignant, absurd and satirical, and an all around great read. I can think of nothing more than can be said of it.

-“My darling, what else is there to do?” reasoned the Irishman. “What other occupation is there for an active man on this earth, except to marry you? What’s the alternative to marriage, barring sleep? It’s not liberty, Rosamund. Unless you marry God, as our nuns do in Ireland, you must marry Man–that is Me. The only third thing is to marry yourself– yourself, yourself, yourself–the only companion that is never satisfied– and never satisfactory.”

-“All habits are bad habits,” said Michael, with deadly calm. “Madness does not come by breaking out, but by giving in; by settling down in some dirty, little, self-repeating circle of ideas; by being tamed.”

-“I can tell,” said Michael savagely, out of the gloom. “Marriage is a duel to the death, which no man of honour should decline.”

-“The truth is that when people are in exceptionally high spirits, really wild with freedom and invention, they always must, and they always do, create institutions. When men are weary they fall into anarchy; but while they are gay and vigorous they invariably make rules. This, which is true of all the churches and republics of history, is also true of the most trivial parlour game or the most unsophisticated meadow romp. We are never free until some institution frees us; and liberty cannot exist till it is declared by authority.”

I have no criticisms of this book. The cynic might point out the implausibility of the court case, the absurdity of the psychologists and residents participating in such a farce, of the near inconsistency in various letters randomly being produced, but to criticize these things is to miss the spirit of the text.

Instead of offering a criticism, I’ll instead point out a nice parallel to another text:

-“I mean,” said Mary, “they are the kind that look outwards and get interested in the world. It doesn’t matter a bit whether it’s arguing, or bicycling, or breaking down the ends of the earth as poor old Innocent does. Stick to the man who looks out of the window and tries to understand the world. Keep clear of the man who looks in at the window and tries to understand you. When poor old Adam had gone out gardening (Arthur will go out gardening), the other sort came along and wormed himself in, nasty old snake.”

–”So many men make the mistake of thinking that the woman is the adventure. But that is where the relationship immediately goes downhill. A woman doesn’t want to be the adventure; she wants to be caught up in something greater than herself.”–Wild At Heart