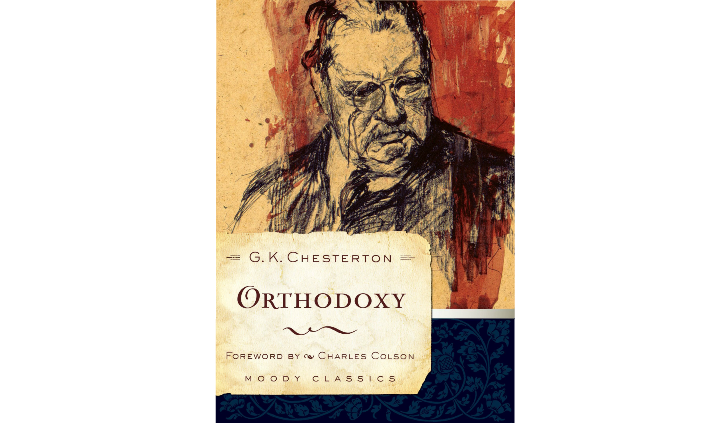 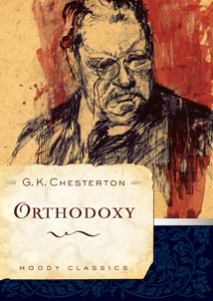 There is perhaps no better place to begin delving into the treasury of lucid wit that is G.K. Chesterton than with his intimidatingly-named book Orthodoxy.

Indeed, for myself personally there are few books to which I am more indebted than Chesterton’s Orthodoxy. I might say with some certainty that it is the book which spurned me to think critically about my faith, to delve more deeply into the boundless pool that is theology.

The book is what one might call the second in a series, preceded by Heretics. The former was formed as a rebuttal to all the popular thinkers of Chesterton’s day, and having been criticized for not having offered a positive alternative he set out to write Orthodoxy.

Complimenting Chesterton’s antagonistic nature the book’s structure parodies the format to H.G. Wells’ essay ‘The Skepticism of the Instrument’, and much of what Chesterton writes in Orthodoxy seems to be a rebuttal to Wells’ skepticism. The flow of the book follows what Chesterton points out as being his own journey in discovery of the Christian faith. His analogy is one of an adventurer setting off to discover a new land – or a thinker setting out to formulate a new philosophy – only to find upon completion that his new land was really the old one, that his new philosophy had been set forth over two-thousand years before. As Chesterton notes: “When I fancied that I stood alone I was really in the ridiculous position of being backed up by all Christendom… I did try to found a heresy of my own; and when I had put the last touches to it, I discovered that it was orthodoxy.”

Chesterton’s apologetic is one of the common sense, taking the reader turn by turn through each philosophy which pushed him away from the world and towards Christianity. The culmination of this rests in the end of ‘free thought’:“It is vain for eloquent atheists to talk of the great truths that will be revealed if once we see free thought begin. We have seen it end. It has no more questions to ask; it has questioned itself… It is time we gave up looking for questions and began looking for answers.”

When he comes around to discussing Christianity one cannot pin down any overarching epiphany due to which Chesterton accepts Christianity, for the reason that it isn’t any one reason. Rather, it is a vast accumulation of reasons. That Christianity possess the unique ability to discern ‘illogical truths; that the monstrous divergence between man and animal is in need of an explanation; that Christianity is capable of balancing seemingly opposing forces, and that it is this balancing (as opposed to a compromising) of these opposing forces which sets it above the rest – what might be called the paradoxes of Christianity. It is not a truth, but a truth-telling thing.

The book as a whole is a trailing portrayal of a journey through everything that is wrong with the world to the discovery of that which is true. In outlining his reasons for Christianity he simultaneously refutes almost every heresy and opposing view imaginable, yet he does so with the whim of common sense rather than a strict logic – chiefly that the mistake of the opposing views can be seen either in their suicide of thought or the manifest mistake of their entire lives (ie, skepticism stops thought, while pantheism stops love). The text is at once fun and challenging, touching the depths of philosophy and theology while maintaining the common sense air for which Chesterton is so well known.

This is another of those books in which one may find a memorable quote on every page. Many are too long to post what I’d like, but here are a few of my favorites:

– “The modern world is full of the old Christian virtues gone mad. The
virtues have gone mad because they have been isolated from each other and are wandering alone.”

-“Keeping to one woman is a small price for so much as seeing one woman. To complain that I could only be married once was like complaining that I had only been born once. It was incommensurate with the terrible excitement of which one was talking… Surely one might pay for extraordinary joy in ordinary morals.”

-“Anarchism adjures us to be bold creative artists, and care for no laws or limits. But it is impossible to be an artist and not care for laws and limits. Art is limitation; the essence of every picture is the frame.”

The first point that readers of this book should keep in mind is not so much a criticism as a word of warning regarding Chesterton’s seemingly blind hostility towards all things Puritan. It should be noted that whenever Chesterton uses the terms ‘Puritan’, ‘Calvinistic’ etc, in his work they are rarely in reference to any system of thought but serve rather as general epitaphs for anything dealing with determinism. He doesn’t seem to actually show an understanding of Calvinistic thought but boils the entire argument down to a dichotomy against free will.

If I had to venture a guess it seems that Chesterton’s harshness towards Calvinism is an overflow of his hostility towards materialism and the determinism of Marx and the like, the view of a completely mechanical universe and man which pervaded the thought of his time. In ridding himself of deterministic materialism he threw out all things which gave the slightest hint of it’s notions, which for him meant that Calvinism had to go to.

That word of warning given, the only thing close to a criticism of this text would be the Protestant one – which the Catholic reader is naturally free to dispense with – in that in Chesterton’s outlining of orthodoxy, he seems to be chiefly outlining and promoting Christianity as a life-philosophy. It impacts his life in that it is the only sensible option, but there isn’t the slightest hint of gospel within Chesterton’s orthodoxy. He makes an excellent argument for Christianity as the philosophically, theologically, and practically correct choice ; he accounts for it being the best way for man to live bodily, but offers little for his soul. While it is full of the truth of Christianity, the gospel is simply absent from Chesterton’s worldview.

The words of J. Gresham Machen are perhaps the best rebuttal: “Hence appears the uniqueness of the Bible. All the ideas of Christianity might be discovered in some other religion, yet there would be in that other religion no Christianity. For Christianity depends, not upon a complex of ideas, but upon the narration of an event.”

Chesterton has all the ideas, but he lacks the event. I guess this might be indicative of his Catholicism, or at least his Thomism, where the fall of man is more of an intellectual problem than it is an spiritual/sinful one of the will.